So you’re coming to Australia for a short (or long) holiday.  One of the things many people neglect to think about is getting connected when you arrive.  It’s easy to not remember this and then panic when you do arrive with how you’ll get on the internet to find out where you’re going etc.

Luckily Australia is a very connected country with limited restrictions on how and where you can get online.

When you first arrive at the airport you’ll generally find free wifi is available to connect.  Some limitations may apply such as how long you can stay connected or how much data you can use before being kicked off but generally you’ll be OK to contact your friends and family back home to let them know you arrived safely.

After you’ve cleared immigration and customs the airport terminals always have carrier stores for the major Telco’s so you’ll be able to quickly stop by and activate a new sim for your phone.

Getting a Sim Card

The major three carriers in Australia are Telstra, Optus and Vodafone.  Their coverage varies but is generally pretty good while ever you’re in a built up area.  Telstra is the better of the carriers if you plan to spend time outside major metropolitan areas however the other carriers are catching up all the time with coverage.

Pricing can vary significantly all the time with carriers offering different plans and bonuses all the time.  Be sure to shop around before settling on the first provider you see.

It’s important to know that you can move your mobile number between the carriers, normally at no cost so if you’re unhappy with one you can easily keep your number and move to another provider without the inconvenience of setting up a new mobile number.

There are also a number of third party carriers which resell bandwidth from the major three.  Some of these may be easy to purchase at the airport but others may require you to visit a supermarket or convenience store.

You can check which of the networks these carriers use if you want a better idea of coverage etc.

You may find the sim pack shows a mobile number on the back of the pack so you can preselect and some carriers will allow you to select a number when activating.  Others will assign a number and you don’t really get a choice.

Australia only operates 3G and 4G networks on the GSM network.  Most GSM phones will work just fine in Australia.

5G is being rolled out by the three main carriers however is not available in many areas outside major metropolitan areas at the end of 2019.

Older phones operating on 2G will no longer work in Australia with the carriers shutting down the 2G networks over the past few years to use the bandwidth for 5G coverage.

Australian carriers require ID to activate services.  You can generally buy a sim from a store without any ID however will need to provide a drivers licence number or passport number in order to activate it.  Some carriers may require an address but I’ve found using the address of your hotel to be sufficient.

When Does it Expire?

Australia is scarce with “tourist” sims unlike other SE Asian countries where sims may expire after 7-14 days.

A prepaid sim recharge will normally last for 28-30 days depending on the carrier.  The service will normally stay active for 12 months from the last recharge expiry giving you opportunity to top up the credit and continue using the service later.  Be sure to check with the provider.

Some services can be setup with 365 day expiry on the credit but these generally don’t have much in the way of inclusions.

All of the major carriers and many of the smaller ones offer both voice/data and just data services depending if you want to use the sim in your mobile phone or in a hotspot/tablet etc.

The inclusions will often vary depending on the type of service you sign up for so if you’re just wanting something to put in a wifi hotspot look at the data only plans as they will normally include more data to compensate for the lack of voice inclusion for the same kind of money spent.

All the major Australian carriers offer esim however most carriers only provide esim on contracted plans.  At the time of writing Vodafone is the only carrier that allows esim on prepaid plans.

If you’re only staying for a short stay and aren’t interested in purchasing a sim you’ll find wifi is available in most urban areas in abundance.  Many cafes, restaurants, supermarkets, shopping centers, public transport hubs, hotels, hostels and more will have wifi hotspots, most often available free for customers.

It’s worth noting the security risks involved with public wifi networks.  Anyone else on the same wifi network can see the data you’re transmitting.  Worse still scammers have been known to setup wifi networks using popular names, eg. “Starbucks Wifi” in order to steal data.  This could include things like your email address, phone number, logins and passwords.

It is highly recommended when using any wifi network whether it is open or secured with a password to connect via a VPN.  A VPN (or Virtual Private Network) is a service which encrypts your data from your device and routes the data through their servers while remaining encrypted.  This means no one will be able to see what you’re doing online or decrypt your information.  In additions VPNs allow you to connect to their servers in any number of other countries making it appear you’re physically located there.  This is useful if a website you’re trying to use limits access to local users only.  For example watching tv shows in normally only available to local users not people overseas.  The VPN will allow you to bypass this restriction.

We recommend Surfshark which allows you to install the VPN on all of your devices, access to international Netflix and above all piece of mind.  If you follow our affiliate link you’ll receive a huge 83% off discount and help us too.  Click here for more information.

Click the Image Below for more information on Surfshark 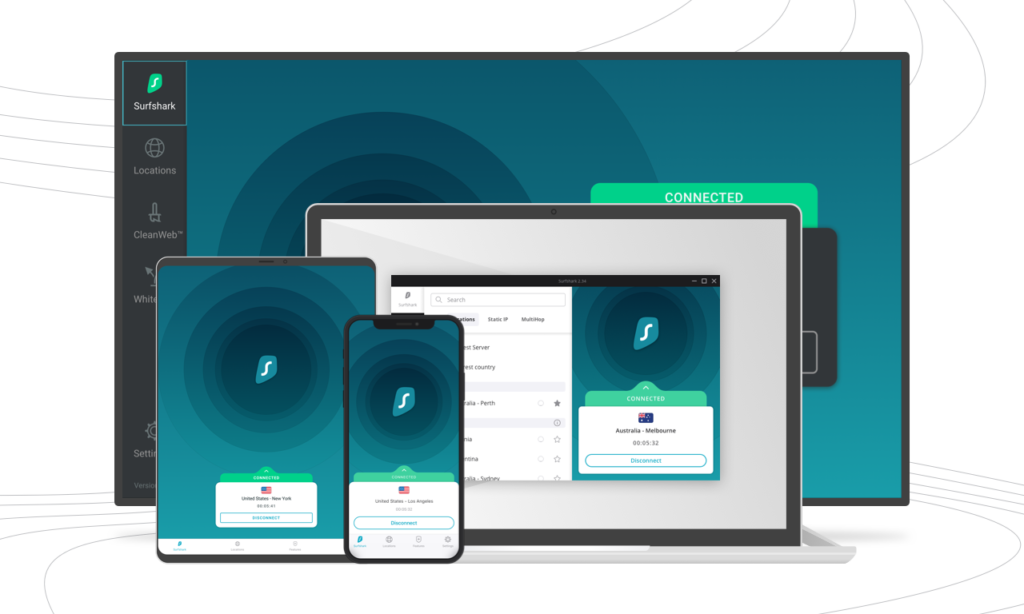